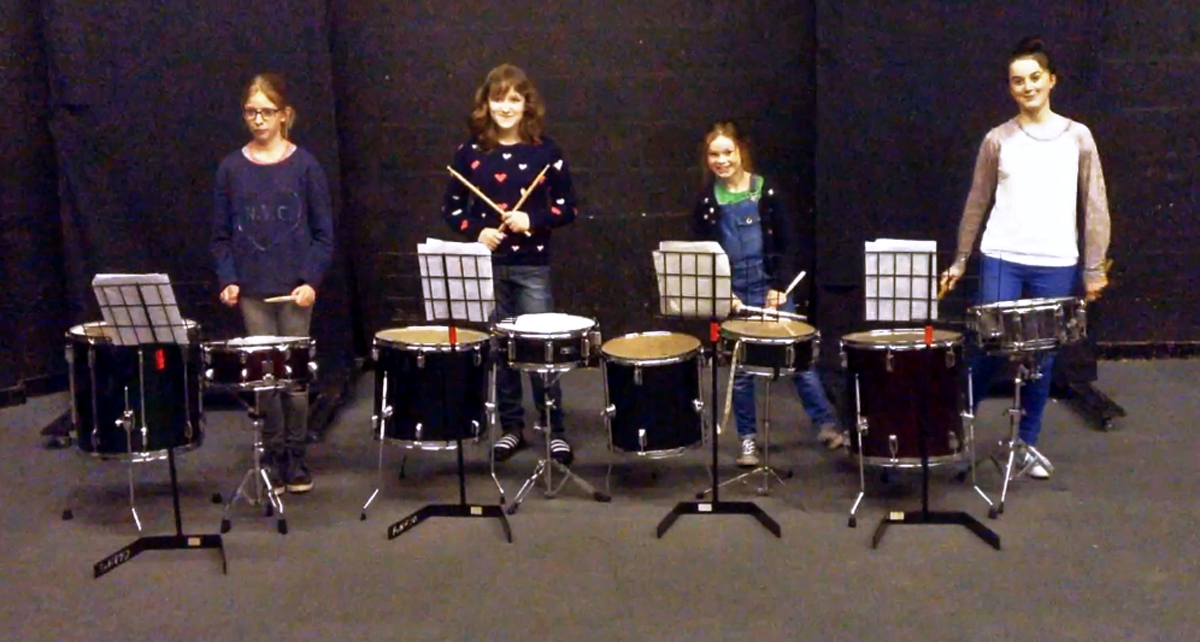 During January this year I found out about Hit Like A Girl and worked quickly to prepare a video in time with my students for the start of Feb. Entries close March 14th 2017, and the competition is every year. Hit Like A Girl is a global drumming competition that promotes girls and women playing drums around the world.

The 4 girls in this video are all members of Montgomeryshire Youth Music (MYM), which I tutor weekly. They all also have lessons with me during the week. The first 3 pieces in the video are from my snare drum sheet music book: ‘10 Snare Drum Pieces – Book 1 – Levels 1-3′. The MYM Drumline usually consists of boys and girls, so this is a one off performance video for the Hit Like A Girl competition.

Hi, I’m Theo, the tutor and teacher of these 4 girls. They all attend a weekly drum group with boys and girls, and they also all have 1 to 1 lessons with me during the week. One of the girls is studying Rockschool grade 2, two of them are studying grade 3 and one of them has only recently became my student. In the video, we perform 3 pieces from one of my snare drum books, which has 3 difficulty levels. The girl on your left is playing level 2 and the others are playing level 3.

When I was learning drums as a teenager in the 90’s, there were few opportunities for playing drums in our area of Mid Wales, apart from one position in the school orchestra or starting a band with friends. I did the latter, and it was brilliant. With the new MYM Drumline group, drum students have an opportunity to develop their skills and meet other drummers. Drum students bring their snare drum and floor toms along and get to play drums in a group together. Some pieces are without reading, and most of the pieces require reading drum sheet music.

Going back to the 90’s again, I recall 3 excellent female drummers, who were always in the top handful of known drummers on ‘the scene’ of playing live in bands and performing. One of these drummers called Janette Williams played in my primary school when I was 10 and this was the point where I became inspired to learn drums because the drumming was so amazing and exciting. I ended up having lessons with her Dad before going on to study at Drumtech in London after high school. Janette now has a career in drumming. Another of the drummers, Sophie Wozencraft, played in my sister’s awesome band Twisted Tales and also has a drumming career.

I have now been teaching for 8 years and in January I decided to gather some stats on how many girls and boys learn certain instruments. Out of 9 primary schools and after school lessons of all ages, 47% of my pupils are girls and 53% boys. 39% of my students are drummers, 38% guitarists and 23% ukulele. 37% of girls chose guitar, 34% ukulele and 28% if girls chose to learn the drums. It is good to see these figures for girls fairly even between the 3 instruments. For the boys, 14% chose ukulele and 48% chose drums. To me this shows that girls don’t have any inhibitions of learning drums and gender stereotypes do not come into play. In fact, one of my students said “We need more girl drummers!”. So, this is what our video is all about – further diminishing remaining gender stereotypes with every snare drum hit, and inspiring more girls to take up the drums.

One thing is for sure – drumming is not about power and strength, it’s about technique, consistency, concentration, precision, timing, practice and hard work, focus, creativity, and listening. All of these attributes are non gender specific, so girls and women have the same possibility to be amazing drummers and the whole world needs to know it!

The story has also been featured on MyWelshpool here (screenshot below): http://mywelshpool.co.uk/viewerfeatures/ArticleId/12479. 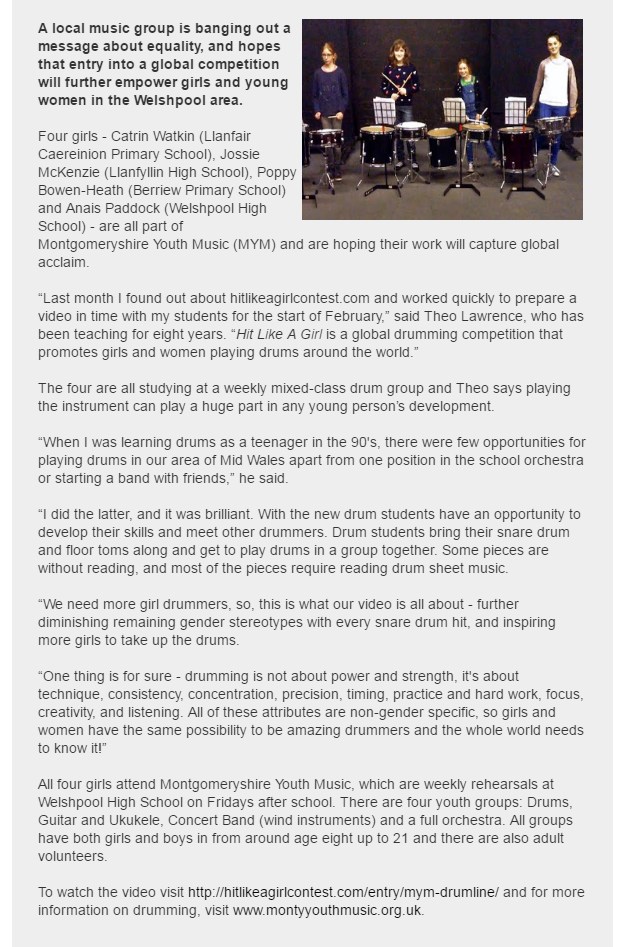 With supplementary funding from the Powys Arts Council.